Pilot’s Log at Mesa del Rey was inspired by two projects: Bracero History Archives and Operation War Diary.  Although I am still continuing the work on my public history project prototype, I feel that reflecting on the process may help me stop editing and changing Pilot’s Log for now. My experience building this digital project breaks down into four components: investigation, consideration, demonstration, and conclusion.

When I stumbled upon the King’s Logs, my curiosity arose and the investigation began. To uncover the story of this place, to find the pilots from Mesa del Rey became somewhat of an obsession. However, searching on the Internet lead me to a fast halt. I had to go on foot and ask for information, often it seemed for directions. Then the multitude of calls and meetings, and archives seemed to be leading into a maze of confusing data. It seemed that I was deconstructing not one, but several puzzles. I kept wishing I had more time or knew more people or knew more about aviation. Starting from scratch and trying to build a project is a much bigger undertaking than I had perceived it before. To complicate things, it was becoming personal, as if I was investigating my own family history. First, I was simply going to collect a few photos from the logs and digitize pages of the local newspaper, but the more I discovered the less likely it seemed that I could leave out names or events relevant.

The research was  constantly in close proximity to my personas, I did not have to imagine them, they were quite real. Thus the consideration for the audience was present in every move I made. Looking back on this aspect, I believe it guided the outcome of the project a great deal. There were many suggestions, contacts, and inspired interviews. Some leads I still have to follow up on. Being close to submitting the final draft of the project, I realize that the imagined personas, aviation enthusiasts for instance, are probably not going to be well served on this site. Why would they be interested in all the old photos and something so out of place? Unless they have a personal connection, they wont be. In addition, I have included very little about planes because my primary focus was the people at the school. I envisioned the stories growing around each person on those photographs. And, what an amazing experience it was to interview a 95-year-old pilot/instructor. Again, this only became a reality because of the collaboration of my involved personas who helped record and film the interview to which we traveled 4 hours each way.

Then it came to demonstrate the results of all the search and design a site that will enable users to browse, contribute, and learn. Omeka and its plugins have worked smoothly enough and allowed me to organize, build, and feature the evolving history of this place. There were minor setbacks with technology, implementing Neatline seemed more than I could figure out, but Geolocation made it easy to map. Adding in metadata and tags as straightforward as it may be, required much time and effort. That was when I was beginning to wish for a team of knowledgeable cohorts to work with. Looking back on my initial plan of storyboard, I realized that I have developed something entirely different. Getting to this point in the process, I am only beginning to see the full picture and the possible avenues that could be taken or changed to make things more accessible for users. Crowdsourcing will not happen unless the crowd comes and offers input. I am not certain about the attraction to the site just yet. Just days before the publication of this project, I realized that although I am going back through the items and adding tags for more search options, it is not apparent from the home page that users may search via tags. My hopes of adding this feature crumbled as I searched Omeka for a solution. It is a complicated process, as I found out from Dr. Leon, “we can craft a call in php (the programming language that we use to make Omeka), but we’d have to edit the file that produces the simple pages within the plugin. In fact, the shortcodes are the only way you can add this stuff to simple pages without having to edit the code.” Hopefully someone will create a shortcode for a tag cloud.

The conclusion is the difficult part: when and where to stop. I know that the site is not finished since I have more ideas to make the searching of pilots easier and much more data and items to include. Since there is interest in publishing Pilot’s Log as a link in local sites, I will be continuing the building of items and refining metadata. While this project presented challenges, it also offered numerous rewards. When I think about how the site is going to benefit others/users, I hope to see contributors making connections from all around the country the way I saw the local people of King City gain interest and knowledge that will be preserved for some time.

I am looking forward to the next course in Public Digital Humanities with hopes of continuing on Pilot’s Log and expanding it with an educational aspect. I am also greatly inspired by all the other DH projects created in this course. I will consider Nashville Sites as a model for a work with the National Steinbeck Center to develop a walking tour similar to Mary Ellen Pethel’s “Nashville Sites,” but instead of the historical markers in Nashville, I will take John Steinbeck’s East of Eden novel as a guide and map the events and sites appearing in the novel ranging from King City to locations in downtown Salinas. 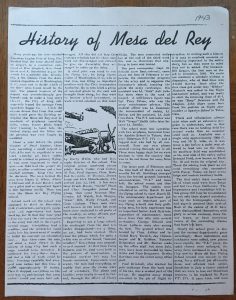 lot’s Log is a website created to preserve the little known history of the flight school operated at Mesa Del Rey Airport in King City, California during WWII (1940-45).  Within the history of the place, the website will predominantly focus on bringing to light the cadets who were at Mesa Del Rey and left for the war after a brief ten-week training. The airport still operates as a small civil airport, however it offers only a binder containing a news article about its history, letters from one pilot’s collection, and a few photographs. A Wikipedia page offers a brief information about the airport. The local Museum features an Aviation Exhibit (currently closed), has a few copies of the King’s Log, the “class” books from the flight school, a silent film depicting cadets arriving on a train to King City, and an interview conducted with one of the pilots, Red Rider. Currently, there is no website that allows audiences to access or share information about this part of American history when young men from around the country were summoned to King City, trained to fly Fairchild PT-19s and PT-17 Stearmans, and left for the war. Other than a few local history enthusiast and local family members of the cadets, the history of the pilots and the flight school is buried in attics, in boxes and in the memories of people around the United States.

The digital exhibit will be created in Omeka using digitized pages from the King’s Logs, photos, interviews, and a film courtesy of the Monterey County Agricultural and Rural Life Museum. The site will have item profiles, exhibitions, and pages about the men. One exhibit will consist of articles documenting the flight school.  The other exhibit will include the available yearbook information (1943-44): list of cadets in each division with the addition of pictures. A collection will display the art (cartoon drawings) and humor depicted in the logs reflecting on the experiences at school. Finally, I plan to map the places around the country where the cadets came from and mark the location of the school. Plugins, such as Video Stream, Exhibit Builder, COinS, Simple Pages, Neatline, and Geolocation will be implemented.