The internship at Stanford University’s Literary Lab began with a round-table discussion event I attended. The event explored, as Mark Algee-Hewitt, director of the Literary Lab phrased it, “the relationship between Literary Studies and the Digital Humanities, specifically that associated with text mining or quantitative analysis. In what ways have we been successful in integrating the two fields to produce new methodologies for studying Literary Criticism and History? Where do the fault lines between the fields still exist and what work might be necessary to synthesize the methodologies of close reading and computation? And are there fundamental incompatibilities between the humanistic study of literature and the Digital Humanities that we may not be able to solve? With four very different perspectives, our round-table participants will lay out the stakes of this compatibility and engage the audience in a larger conversation about the future(s) of the field.” 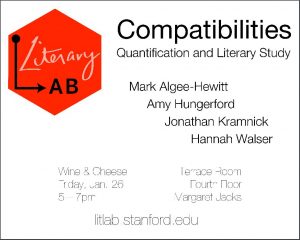 The discussion revolved around the democratic nature of the projects, the question of graphs and Ngrams analyzing language, and the practicality of it in literary criticism. For instance, the issue of close reading being possible replace or in some ways supplemented by a nonhuman analytical tool is a touchy subject of humanities scholars.  While many views and more inquires were raised, the answer were scarce in light of the proposed ideas. As this field continues to evolve, the methodologies of research, developing critical questions, the tools applied, and the emerging criticism are all subject to change and interpretation. In addition, one of the puzzling notions of the crossroad of DH and Literary Studies is the question of where it leads to and what possible answer can we gain from “studying” literature through these tools that haven’t been already considered. An additional missing piece of the puzzle is the interest and connection to the general public, which probes the democratic nature of Literary DH projects and how if at all they may reach beyond the academic realm of readers. As an intern, just beginning to become familiar with the mission and the projects of the Lit. Lab, the event held an impressively involved, intimidatingly intriguing approach to the function of DH in Literary studies.

A few days after the event, and following an introductory meeting with the Literary Lab’s director, Algee-Hewitt, assistant director, J D Porter, and coordinator Erik Fredner, I was able to attend a project meeting. While the Lab has several ongoing projects, I was lucky enough to sit in on the first meeting for the New Yorker Project. As I found out, when opportunity presents itself in a form of a corpus becoming available, DH enthusiast gather to brainstorm  possible analytical avenues and the methodologies through which these ideas may unfold and become visible representations. Thus, the New Yorker Project set out to examine 4, 695 issues of the magazine published between February, 1925 and July, 2017: 559,924 number of pages, 617,088,848 number of words. Some possible suggestions for the study of this corpus were:

Th overall aim and result of the meeting was to share areas of interest in the research and analysis of the New Yorker and then break into focus groups. The upcoming meeting will begin in assembling the groups and begin tagging the corpus for markers of short story, poetry, reviews, text vs. non-text,

On the wall of the conference room, all present and future projects are listed, indicating the phase of each. I will try to attend the Microg

enre project meeting to get an idea of the development of a given project and different stages of this “organic” collaboration in the Lab. The Migrant Discourse Project (examining migrations in South America and mapping literature along the way) also intrigued me, however, it does not have a set date for its first meeting, so it might be some time before it even begins.

As much as the focus of the Literary Lab is to examine various literature while applying computational criticism to the study of literature, I find an inevitable historical component in the process.

The opportunities created by new web-based free open source technologies in Humanities have been significant in re-examining, interpreting, and relating information from literary, cultural, social, political, or historical data. As we worked with the Library of Congress’ SWA Slave Narratives dataset, it was a journey to discover the variety of ways to visualize the intricate elements and connections within by using three of the visualization tools.

Voyant is a text mining tool that manipulates text through a range of analysis, such as cirrus, graphs, context, and verbal patterns reveal determining elements of the given data. To approach text through word count or patterns is to break it down to a level that we could not accomplish easily on our own. I feel that this tool brings out the other human side of text that reveal words and meaning through numbers.

CartoDB sets humanists off on a different journey. It pulls the data from the set and spreads it out on a map. It layers information and over laps the data to show a geographic relevance in the text. The geography of the interviews in the slave narratives provided a new narrative that grew out of the reality of the locations.

Palladio seemed the easiest to work with as far as the interface concerned. It provides a map of such informational detail that is probably the most difficult to gather by hand. It is an excellent tool to analyze relationships between people, locations, events, and ideas. These connections are illuminating relationships that have the possibility to create a new world of understanding about something we thought we knew. For instance, Palladio paints a busy visual of the relationships in the Jazz World, manages to make sense of the communication around The Letters of the Republic, and gives layers of insight into the slave narratives.

In comparing these three digital tools, in light of the slave narratives, I’d prefer to use Palladio. It seems that the network analysis of those narratives provides a deeper insight. However, there is no reason not use all three and compare the results and the questions each tool was able to bring up or answer. Although the nature of the project and the type of text/dataset and desired results may narrow the tools down to text mining or mapping there is no reason not use them interchangeably. Overall, these tools are able do something we humans would or could not easily produce, thus the possibilities are endless.