Palladio is a free web-based tool that maps relationships and network in a given dataset. The feature we have experimented with is the mapping of relationships between data points and people by using the WPA Slave Narrative Project from the Library of Congress’s. After having seen this narrative data mapped on CartoDB, were able to discover relationships between the interviewers and the interviewees, see  connections relevant to the various data points, such as topics discussed by male vs. female slaves or topics generated based the the type of slave interviewed.

The first steps to embark on visualizing connections within a data is to upload the dataset to Palladio. 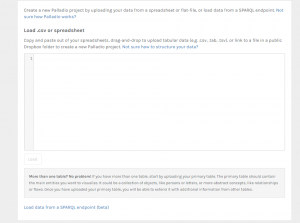 Layers of data can be uploaded and compared to reveal relationships, which based on manipulating a variety of elements of the data could result in mapping specific connections and yielding new insight into the data. 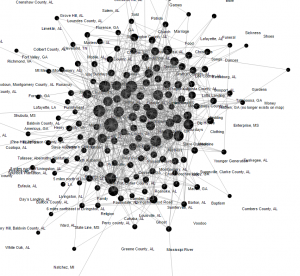 The above visual map shows the distribution of interviews by location. While the image below reveals connections determined by gender in connection to topic discussed. 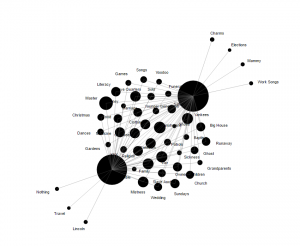 Overall, Palladio was a great tool to venture beyond the geographic visualization of these interviews. Its usefulness was apparent when we began to experiment with different data points in the slave narratives to visualize the relationships between relevance of topic based on age, gender, or type.