I have visited the National Steinbeck Center many times before, however, I was compelled to do it again, so I could walk through and view it with the fresh eyes of a public historian. The place is primarily dedicated to the memo 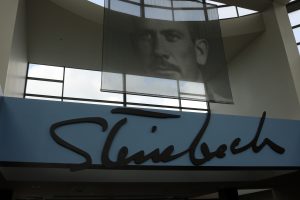 ry and work of John Steinbeck. It is named appropriately a “center” because it has been the focus of events and activities that promote learning about literature, culture, history, human nature, art, and agriculture. The building was erected two blocks from Steinbeck’s childhood home, and is standing nearly in the same spot where once his books were burned. It stands at the end of Old Town’s Main Street, waiting for visitors of Salinas to walk in and complete the journey. Steinbeck’s large transparent portrait hangs from the ceiling greeting visitors, though to the curious eye it is visible from the outside as well. It suggests a promise that the history – personal or public – will be presented through Steinbeck’s transparent view.

s evident in the questions Steinbeck raised with his writings and still continues to examine regarding communities, deceits, families, dignity, good and evil and man’s inhumanity to man. Steinbeck himself is a symbol of controversy; he was both despised and revered during his lifetime.  Steinbeck told the truth during the Great Depression, during the wars, and  about America in the 60’s. Thus the primary audience for this place is made up of people who read Steinbeck’s novels and appreciate his empathy of historical struggles, his ability to tell the truth, and his mastery as a writer.

The entrance to the exhibit invites the audience on a journey, first and foremost into the literary heritage of Steinbeck, and then to the familiar places

he evokes in the books. The museum is a walking tour starting with the first of several maps, this one shows the setting of Steinbeck’s novels.

There is a map of Steinbeck’s expedition to the Sea of Cortez in the Gulf of California, the map tracing his travels with Charlie,

his beloved dog, and the map of Europe lighting up the places he had visited during and after the war. The walk begins with Steinbeck’s personal history, tracing back to his parents and grandparents, portraying photographs, small bits information, a bed, books, and more personal memorabilia. This leads into the first novel of the exhibit, East of Eden, which includes Steinbeck’s own family in the narrative.

Steinbeck’s words are all over the exhibit. They are printed on pillows, inside drawers, on the walls, and behind doors. Surrounding each section or turn

of the walk historical locations come to life drawn from the books: a wooden railing, a large poster of downtown Salinas about a hundred years ago, children can sit on a red pony, or in a Model T Ford and pretend. Scenes from the movie based on East of Eden are played on a TV screen

or read by actors. Around the next corner, visitors will encounter another time, another place where they can try on the clothes Of

Mice and Man’s Lenny and George.
Words reveal themselves with the pull of a sword, by opening a safe, and pushing a button. Further down the “road”, visitors walk through Monterey’s Cannery Row, then to the beach in Mexico, and in one sharp tu

rn, they will be faced with rubble from WWII. Each one of Steinbeck’s novels creates its own world, location, history, and language while interacting with visitors. There are puzzles, questions, and references from the books reminding those who read them and intriguing others to open them. Many of the quotes, information, and questions are translated into Spanish as well – mainly the ones that come from the books set in Mexico or tells stories of Mexicans.

The last section of the walk leads to the East Coast, where Steinbeck lived and work towards the end of his life. The tone of t

he exhibit seems to turn more political, serious, and reflective. Turning from fiction to nonfiction, from the empathy of humanity’s struggles and triumphs to the sharpness of reality still hunting it. The last turn displays Steinbeck’s achievements and legacy as a writer and the visitors leave with a sense of accomplishment that is colored with sadness and joy as it yearns to know more.

In the lobby a small theater shows two movies: a Steinbeck Biography and a hanging menu of movies and documentaries made from or about his books.  Before leaving, visitors can browse in the bookstore and purchase not only Steinbeck’s books, but most of the publication in connection to his writings and history, along with other Steinbeck memorabilia.

idea is revealed. Visitors are without a docent or a guide, although there is a person at the entrance of the exhibit by the sign-in book who will answer questions about the museum. The flow of traffic is easy ad interactive, thus people may go back to a certain book, explore a room, sit in the boat, or ponder about a quote. It is hard to think of one more way to exhibit a writer, his work, and relevance.

While the National Steinbeck Center exhibits focus on exploring the writer’s books in historical, cultural, and artistic context, the official site on the Internet presents a community oriented cultural center. 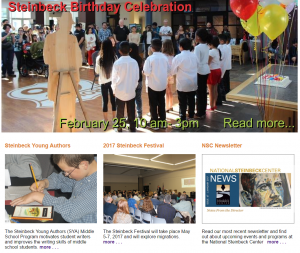 The front page reveals current events, such as Steinbeck’s annual birthday celebration, the Young Author’s Program, the Festival, and the Newsletter. Other events include the Day of the Dead, Mariachi, Comic Con, and the Sweet Thursdays. The site is easy to navigate and puts out practical information starting with general knowledge for visitors; directions, fees, calendar, contact, and suggestions to explore Salinas and the surrounding tourist attractions. Links to events, education, about the staff and board members, about John, the museum store, and ways to support the center are to guide users to gain more information.

Facebook, Tweeter, and Intagram are further spreading the news generated from the National Steinbeck Center.

post photos from the events, about books, and more. The site is currently under construction, it is being rebuilt because of the previous site’s hot went bankrupt. Thus, some of the drop-down menus are lacking information.

Although, there is a contact section, through which visitors of the site may reach the staff of the center, there is no opportunity to interact with it, except via Facebook or Tweeter. Researcher will find the archives link incomplete, however, they will be able to review the rules regarding access to materials and contact the archivist. The education tab is still under work,

but it promises two opportunities for schools to involve students in reading Steinbeck and interacting with the Center to enhance the experience. I was interested in reading about the Center’s history, about the design, the architect, and especially wanted to find out more how the transparent portrait came to be – this will have to wait too.

While, I was completely in awe of the physical appearance, presentation of material, and effect of the Steinbeck Center, the digital face is lacking more than one way. People visit this place from around the world and a way to reach interested audience through the Internet would benefit not only the center itself, but also the events, and materials housed there. Crowdsourcing opportunities to share experiences of readers, visitors, artists, students or teachers inspired by Steinbeck’s work could enhance the digital experience with stories, lessons, or photos. In addition, I find it curious why the web site does not offer any information about the museum  exhibit at all. A menu should include elements of the museum and the theater along with the shop and the events.