To begin this post, I decided to check the Wikipedia page on crowdsourcing, which provides the evolution of this partnership between institutes and the wild crowd of the world. I particularly liked one of the several definitions offered, “Crowdsourcing is channeling the experts’ desire to solve a problem and then freely sharing the answer with everyone.” In the genuine spirit of crowdsourcing, the history reaching back to non-digital times presents some great examples: best solutions to measure ship’s longitudinal position outsourced by the British government in 1714 or the Mr. Peanut logo designed in 1916  by a 14-year-old boy who won the Planter Peanuts logo contest. 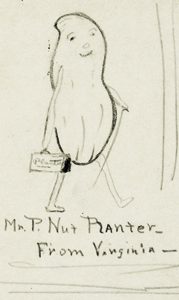 Both of these instances were playing off of the idea of community building, a common goal to solve a problem.

Crowdsourcing in the digital age makes even more sense. DH projects can greatly benefit time-wise and financially from involving the members of the public to solve problems such as transcribing many thousands of documents, making newspaper text corrections, fixing maps, tagging, and adding to collections of images. The Transcribe Bentham project and Papers of the War Department benefits from calling the members of the public to transcribe historical documents. The Trove and Building Inspector projects work with the public in correcting historic maps and text.

These projects, however, need to be publicized, so the public could discover them, as Sharon Leon of the Papers of the War Department expressed, “they won’t come just because you build it.” Social media sites are usually a good way to spread the news to go beyond the small community of researchers and scholars interested in a given history or cultural project.

Crowdsourcing is a joint venture where both parties benefit. While an overwhelming project gets done is a reasonable time frame, The public contributors will not only learn about facets of history, but also receive a satisfaction out of contributing to a greater good to further the development of researching humanities past.

Having contributed to Papers of the War Department and Building Inspector, I discovered that by experiencing the satisfaction of contributing to a historical research it also propels one to want to learn more thereby contribute more to the given project. It also allowed me to discover another aspect of DH and how it works. Building Inspector’s motto, “Kill Time. Make History” is probably drawing more people in by its catchy slogan and by the instant accessibility of its interface. While the transcription of the was documents offers a considerable learning experience both in transcription and in history, the Building Inspector aims for a fun experience in learning about maps of New York. There is also a safety net built into these projects as editors continuously check the work of volunteers.

I have been using wiki pages by pbworks with my students to share and collaborate on writings and projects. This crowdsourcing practice made me rethink how else I could have students learn by following the example of these practices create and correct projects of their own in a more collaborative way using the class wiki as a platform.